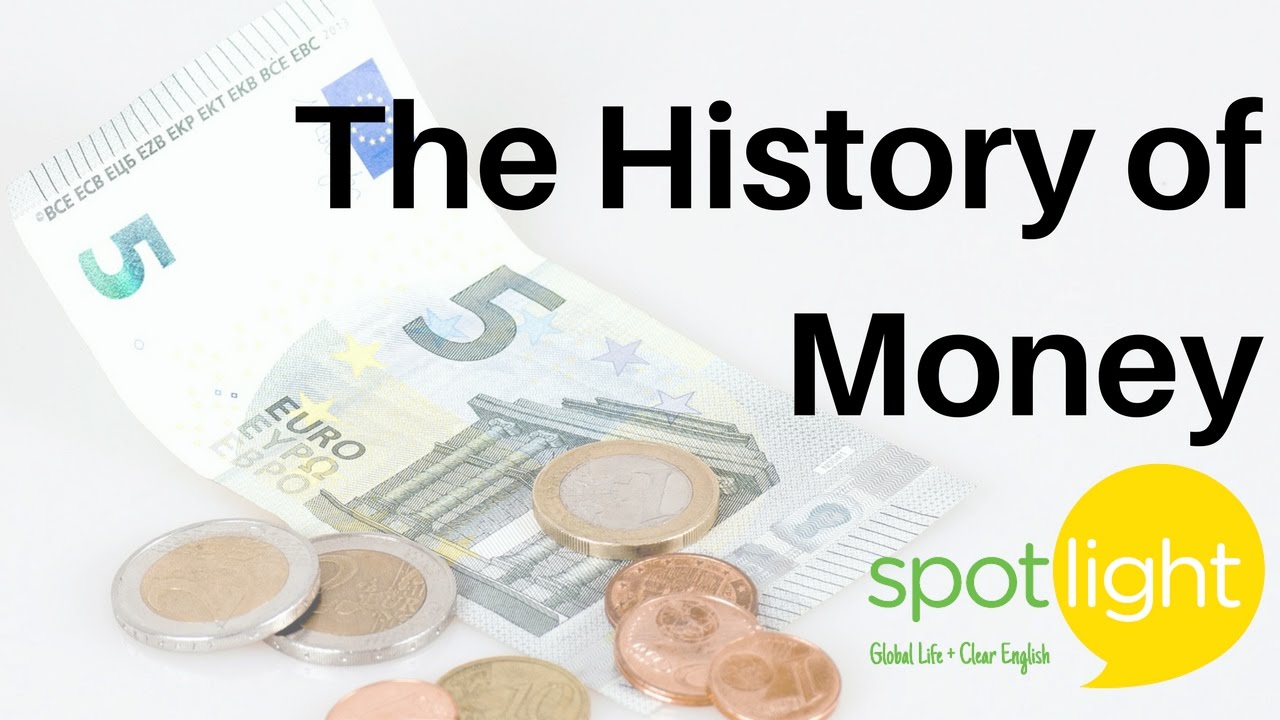 THE HISTORY of MONEY

Small, shiny shells. Round metal coins. Colourful paper. Square pieces of plastic. What do these things have in common? They are all different kinds of money!

How do you get the things you need? Do you trade with a friend? Do you use paper money, or coins? Or do you use credit? Throughout history, people have used all of these different kinds of money. Today’s Spotlight is on the history of money.

Trading is one of the first ways that people have gotten what they need. For example, in the past, salt was very important to people. People needed salt to keep food fresh. So people would trade salt for other things they needed. People traded salt for shoes, tools, weapons and food. This method of trading is called bartering. Instead of buying things, people bartered, or traded, for them.

So over time, people developed a new system. Instead of bartering, people would trade for particular objects. These objects were often rare or beautiful. But sometimes the objects were even common things.

These special objects are called proto-money. Proto means “first in time” or “earliest.” So, proto-money is the first, or earliest kind of money. Some cultures used objects such as seeds, pieces of wood, animal skins, cloth, and shells.

In Native American culture, people used pieces of a special kind of seashell as money. This kind of money was called wampum. People wore the pieces of wampum around their necks. It was a popular form of proto-money. In the 1600s, local governments in the United States even accepted it as an official form of money! People used wampum in America until about the year 1700.

Another popular kind of proto-money was a shell from the coasts of the Indian Ocean. This shell is called a cowrie shell. People have used cowrie shells in many places - from China to Africa. People used the cowrie shell because it is very beautiful. The shell is white with a little bit of yellow. The surface is very smooth. It is between one and three centimetres long. The small size and the physical beauty made the cowry shell a very popular kind of proto-money. In some parts of the world, people used cowrie shells as money until the eighteen hundreds.

However, the most popular kind of proto-money was metal. The ancient Egyptians weighed amounts of metal like gold or silver. Each amount had a particular value. The Egyptians used gold and silver because of their beauty. These metals were purer than other metals, like iron. People bought things for different amounts of metal. Something very valuable was worth a larger amount and weight of metal. Using metal as money led people to create metal coins.

People in ancient Turkey made the first metal coins. The coins first appeared almost three thousand years ago. People used special tools to create pictures on pieces of metal. Each picture identified how much the piece of metal weighed. Each different weight of metal was worth a different amount.

Coins spread from Turkey into Africa and Europe. Soon, coins became the most popular form of money. People began to use coins all over the world. Coins had many different kinds of pictures stamped into them. Some coins had animals, while others showed common things such as tools or plants. Each different picture represented a different amount.

The first person to have his face on a coin was Alexander the Great. Alexander the Great lived more than two thousand years ago. He was the king of an area in Macedonia near Greece. He fought many battles, and never lost. He is one of history’s greatest military commanders. His coins were used throughout his territory.

Even though coins were so popular, it was not easy to carry a lot of coins a far distance. They were too heavy. The Chinese were the first to use paper money instead. They started using paper money more than one thousand years ago. This new paper money was easier to carry for long distances.

Hundreds of years later, Europe also began to use paper money. In the beginning, people wrote paper money by hand. But as time went on, governments took over the job of making money. If paper money became damaged or too dirty, a person could trade in their old money for new money. If they needed to, they could also trade in the paper for its value in gold or silver.

Money has continued to change, even in recent times. In some places, people rarely use money. Instead, they use thin plastic credit cards. Using a credit card, a person borrows money from a bank, when he buys something. Then, at the end of the month, he pays the bank. This makes it easy to spend money! Money experts say that it is too easy. When people use paper money or coins, they spend less money. When they use a credit card, people spend more money - even too much money. This leads to debt - the person owes money to the bank.

What will money look like in the future? Experts think that soon everything will happen electronically - using computers. This digital money will replace physical money. This is already happening. But in most places, people still use beautiful, colourful paper money and shiny metal coins.

People from long ago may have never imagined all the different and new ways that people can pay for things today. We have come a long way since the days of bartering. What kind of money do you use?